How Should Church Planters Respond To Gay Marriage? 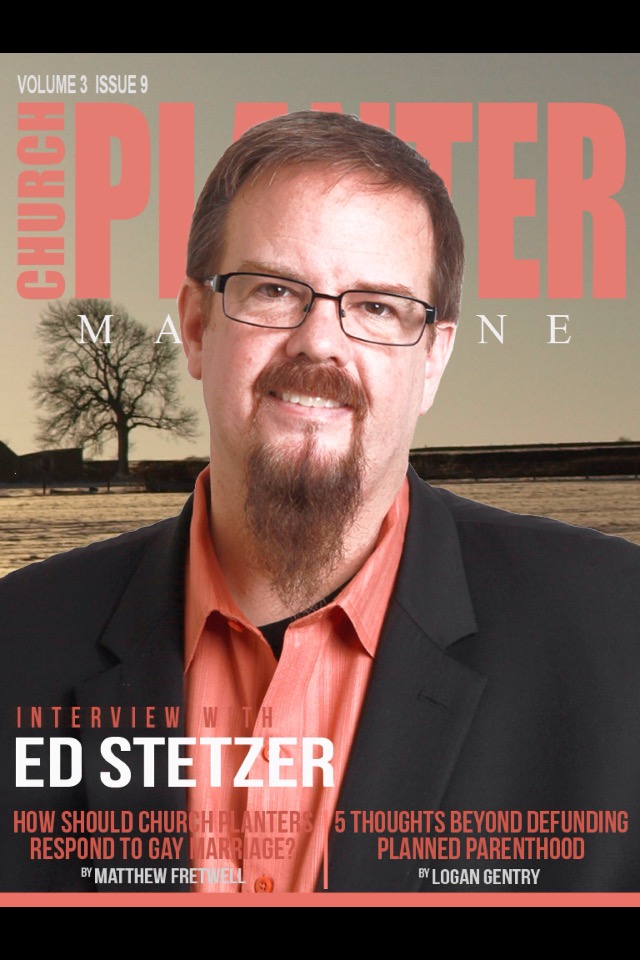 This is the cover article for this month’s Church Planter Magazine.

After twelve years, he was leaving his wife and kids, “I realize that I can no longer live in the shadows and secrets of my day-to-day life,” was the way that he revealed being gay. I’ll be honest—I saw it coming—it was just a feeling that I had. And so, I had waited for him to talk to me about it. I’ll also admit that as a pastor I felt torn inside, one part of me wanted to weep for him, while another had compassion, while yet some other deeper aspect realized that he had just entrusted me with a hidden secret, one that he knew would change his life. He wasn’t confiding in me to explain a struggle; this was a decision to live life. If you’re like me, you’ve had one of these conversations and if you haven’t—you will.

In a recent doctoral seminar, my professor stated, “Our culture is now living in the shadows of the Church.”[1] This means that the early church lived within a pre-Christian culture, not knowing anything about Jesus; however, this is not the case today. As George Barna asserts, ninety-nine percent (99%) of unchurched people are aware of Christianity.[2] As church planters and pastors, our calling hasn’t changed. The gospel must be preached, transforming hearts to turn from sin, while the compassion of Christ must be evident within our lives. So, we need to ask some important questions: (1) How do we exegete our modern culture? (2) What is the church planter’s biblical response to gay marriage? And (3), how do we respond, practically?

While my friend described living in a secret life of the shadows, he actually didn’t know how right he was. In the twenty-first century, believers and unbelievers are living within the shadows of two thousand years of Christendom. In exegeting our culture, church planters must be able to discern it, comprehend it, and then properly engage it. This is a non-negotiable; it will be and must be an aspect of every planter’s toolbox.

Church planters are cultural architects; we’re the innovators and creators who navigate through any society and people group. So, first, let’s acknowledge that there is a dilemma within evangelicalism, one that we can’t look at exhaustively here, but one which must be mentioned, that of gay Christians. For our discussion, we’re going to assume that we’re trying to engage a gay culture of unchurched people, who know about Christianity. We also must assume that all culture will disrupt, influence, or change the liturgy or worship of the ecclesia, whether by music, clothes, food, art, or values and beliefs. Aubrey Malphurs clarifies, “Culture affects all churches. There are no exceptions.”[3]

A church planter cannot engage any neighborhood rightly, without first (1) understanding who the people are (discernment), (2) what they’re values and beliefs are (core values), (3) how they repeat or translate those values and beliefs (ethos), (4) and how they practice them (praxis). We must gauge all four of these before we can truly understand the people that we’re going to engage. Paul does this in Athens, as he walks around, he assesses their religious idols and liturgies, so that he can contextualize the gospel (Acts 17:16-31). So, in exegeting our Western culture, it is clear that there is a paradigm shift in sexual morality. We have to ask ourselves, what is the church planter’s biblical response to gay marriage, as we stand within the shadow of the church?

First, let’s be honest, homosexuality is not a new practice, nor is it a new challenge to the Church. The Apostle Paul, arguably the best church planter ever, noted that the early church was filled with gentiles who practiced idolatry, drunkenness, or some form of sexual immorality (1 Cor. 6:9­–11)—and somehow, the Church squeaked by in growth. I say “squeak by,” tongue and cheek because we know better, the Church grew exponentially. This meant that the gospel was more than sufficient to reach and transform any people group and sin-laden behavior. Admittedly, I view homosexuality as sin, I’m not going to apologize, but I do empathize with people who are seeking companionship in emotional and physical connections. As well, I view sexual immorality the same way that I view drunkenness or idolatry; I don’t categorize the yearnings of our flesh. Biblically and historically speaking, homosexuality was ingrained into the Greco-Roman culture and was engaged by the church head on. And even though it was not God’s intention, the early gentile church was filled with regenerated sexually immoral people.

Sometime near 30-33 AD, as recorded by Matthew (19:4), Jesus provided the creation mandate, that God created mankind male and female—even though the context’s question is about divorce—Jesus is not defending our current definition of marriage. What He is clarifying is that, pre-Law, God created two people who would come together in a duality of oneness. The distinct proponent of the marital bond between a man and a woman is not solely about a blessing or even abiding within the Law, but that the twoness of God’s design would become one “flesh.” For this reason, two like-sexes can never establish the duality of one (or twoness of one) because they only possess an innate design of the same gender. It’s really not about law, ethics, or marital rights; it’s about God’s design and illustration of the miraculous unity of two people—to become one flesh. God’s design is a harmonization of souls, which symbolizes the beauty and uniqueness of the Godhead.

As well, evangelicals recognize that all people are sinners (Rom. 3:23) and in need of God’s grace. This means, just as the early church, in our modern culture, church planters must acknowledge that sin exists and is defeated by Christ’s work on the cross. Yet, we must also destroy the hierarchal structure of “forbidden” sins, which keep people from the grace of God. This means that we cannot pick and choose which sins we tolerate and which ones we do not. One of my biggest objections to those who strongly oppose gay marriage is their quick defense of heterosexual fornication and co-habitation. Their defense states that it is “OK” to have two church members of the opposite sex living together and engaging in sex (i.e. “we’ll look the other way”), but God considers two people of the same sex engaging in the same sexual behavior, as an abomination.

My point: no sin is justified. The biblical response demands that the Church not turn a blind eye to sin, but have compassion to those struggling with sin, and create relationships with all people, for the sake of the gospel. So, whether hetero or homosexual, the holiness of God demands that each person examines his or her own “body” (1 Cor. 6:12–20). As an ex-drunk, I realized that my drinking was idolatry. This does not mean that consuming alcohol is idolatry, but it certainly was with me. I allowed alcohol to take the place of God. In retrospect, I was saying that God could not handle my stress load, or relate to my hard work and anxiety, but the cold beer or glass of wine, could. Likewise, in this case, there is no distinction between drunkenness and someone’s sexual immorality; both are not God’s intended creation for the body or relationship with Him.

If we’re engaging an unchurched gay culture that has knowledge of Christianity, to some extent, then let’s assume that most gays have a presumption about judgment and sin. It’s pretty safe to say that gays have heard the fire and brimstone message of Hell. I’ll also assume that they’ve shut that door—pretty hard. They’ve probably also heard about the biblical Leviticus, Romans, and Corinthians’ arguments and know how to navigate those confrontations. So, why are we trying to engage a culture with confrontation, debate, and argumentation? As if winning a debate has ever brought anyone closer to Christ? Let’s try another way.

One of the beautiful aspects of the gospel is not only the grace provided through salvation in Christ, but the connected deliverance, freedom from sin, and joy in which it brings. A recent Barna poll showed that Americans are increasingly lonely, stressed, and worried about their future.[4] The gospel meets all of those needs; that motivates me. We live in a day and time when gospel engagement is not only necessary, but is vital. So, how do church planters practically engage the gay marriage issue?

The honest and right answer is to respond to gay marriage in the same way that the Church engaged it within the first century. With love, grace, and truth. Each new convert to Christianity was called to embrace holiness, acknowledge grace, receive forgiveness, and rest in the hope of eternal salvation through Christ Jesus. In the first-century, the gospel was infectious within a perverse and immoral culture, and it always will be—as long as the people presenting the gospel acknowledge their own sin and communally express the love of Christ. Church planters can engage the gay marriage issue in the same way that they engage any immorality or sin—through the lens of Christ coupled with a fresh recognition of their own salvation (Eph. 2:8–9).

For us, it must be about praxis. Jesus made a point of going to the demonized, outcasts, prostitutes, and extremely diseased. He touched them, sympathized with them, and embraced them. Jesus ate with them, walked with them, and sometimes even defended them (though, not their sin). Our difference in ministry is that we are presenting Jesus, being incarnated within community, to those who are affected by sin, sickness, or culture. We expect sin-blinded people to “get it,” even though we, ourselves, never “got it.” We must admit, there is no little girl that wakes up desiring to become a prostitute one day. We exegete culture because sometimes culture causes people to become things they do not desire to become. Jesus was the best example of how to read and incarnate into culture.

So, church planter, —it is your calling to exegete the culture. You should contextualize the gospel and rely on the power of the Holy Spirit to help transform a broken and hurting heart. You should assist a gathered community of Christ-followers to help, not hinder, reconciliation. Church planters are bringing a resurrection community into a worldly society. And, while some in the gay community may not be “struggling,” certainly we acknowledge that, but we do not change the way that we present gospel truths or compassion, empathy, and the reality of sin’s captivity. Therefore, church planters are bringing with them the kingdom of God and must view the gay marriage issue as every other sin—redeemable by the blood of Christ.

[2] George Barna, and David Kinnaman. Churchless: Understanding Today’s Unchurched and How to Connect with Them. (Carol Stream, IL: Tyndale Publishing), 48.

[3] Aubrey Malphurs, Look Before You Lead: How to Discern and Shape Your Church Culture (Grand Rapids, MI: Baker Books, 2013), 74.