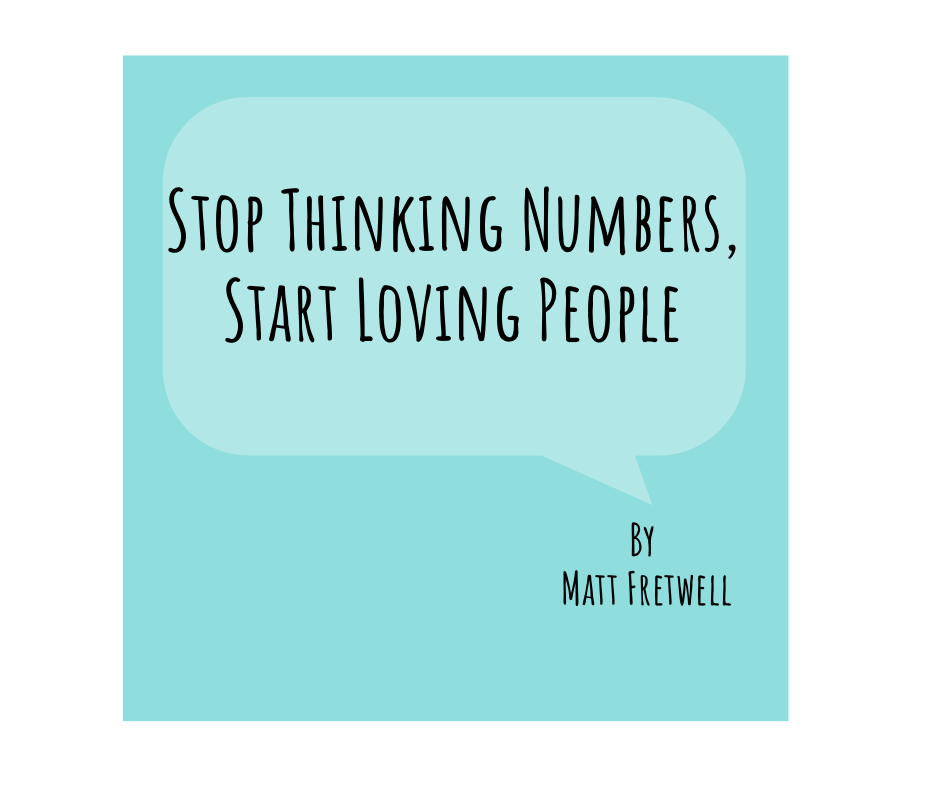 Not necessarily beginning with, but accredited to, Donald McGavran and C. Peter Wagner, the Church Growth Movement compelled churches to grow by utilizing sociological analysis.

I’m not one of the critics that thinks the church growth movement was evil. It was nearly 60 years ago! At the time, there were applicational questions that McGavran and Wagner presented, and I think that most will agree—the “status quo” was lackluster.

As well, I don’t think it’s evil for a church to count heads and know who they’re reaching and how many. I don’t like polarizations. I’m usually more of a both/and type of person (except in salvation—that’s black and white) than an either/or.

My point in this brief article is to help church leaders see people for who they are—people.

Sometimes leadership can become so obsessed with bringing in more people that personability is lost. Numbers become personified—taking the place of people.

One of the first questions I get at conferences is “How big is your church”? As if this is relevant to anything? Must I explain that I took over a revitalization—that I work with church planters? Why are we justifying “numbers” with success?

The beautiful aspect of church is that it’s the only organization on earth that collects dysfunctional, hurting, pain-ridden, broken, and sinful people with an anticipation of being perfected (in Christ). An anticipation of redeeming love.

The overall premise of the church is reproducible disciple-making to bring about rejuvenation, renewal, and reconciliation (in God).

Once again, I don’t want to discredit churches that are doing amazing work—but let’s not get distracted from the goal—disciple-making. I speak to numerous church planters and pastors who see their work as a failure because they’re not growing at the rapidity of others.

These leaders read way too many books, listen to far too many podcasts, and see too many social media posts regarding numbers, programs, and the “quick-fix.”

The main goal of the church has always been about making disciple-makers(Matt. 28:18–20).

I wonder if the Thessalonian churches were envious of the Philippian church’s size—for they had deacons and bishops (Phil 1:1)? The Philippian church had wealth—they supported Paul on his church planting mission—perhaps they could show the other churches the “right” model?

Or, perhaps, the Ephesian churches wrote letters to the other churches with the best program “to reach the masses”? Maybe they distributed scrolls for, 8 Simple Ways to Be Awesomeor Grow Your Church Like Ours?

I never pick up on any of that in Paul’s writings. I see in Paul, a person who was a devoted disciple-maker (1 Cor. 11:1; 2 Tim. 2:2). Paul was a servant who was dedicated to two words, “Christ crucified” (1 Cor 1:23, 2:2; Gal. 2:20). And, Paul’s motivation was to see the churches reach maturity. I’ve never read a single statement from Paul consigning numbers over people.

I think in today’s church, leaders can sometimes make things more difficult than they are—instead of keeping it simple.

What if the church focused on only two things? (1)The gospel. (2) Reproducible disciple-making.

The gospel and reproducible disciple-making are centered in Christ and focused on people—the dysfunctional, hurting, pain-ridden, broken, and sinful people. If the church begins to look at people through the lens of Christ, growth will occur—naturally.

If we do life together—as the called out gathered ones (ekklesia)—our lives will be centered in Christ, releasing us to live out our lives within the world.

If we focus on gospel transformative reproducible disciple-making, our hearts are directed at people and for people.

If all we’re solely interested in numbers, then we’re neglecting the missional mandate to love one another and make disciples.

Let’s not reinvent the wheel—but simply, go back to the basics.