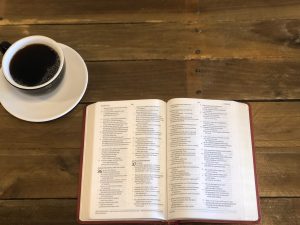 The Western church has been traveling along the highway of culture with punctured tires. With warnings from passersby, finally, the hazards began blinking as a testimony to the crawling headway of expansion. For years, a passionate plea from prophetic missiologists and the apostolic elite—the Church must pull over and change its treads.

Throughout the eighties and nineties, a call for Western and global church planting was being received—by some. Today, the message of missional engagement has caught on and with a millennial onslaught of hipster urbanization, the Church began birthing city-wide movements.

Coupled with the crazed and called (or confused), more and more church planting networks popped up around America. Each network—with its devised models, programs, and assessments—concentrating upon the inevitable and highly anticipated— “launch.”

Some planters focused on raising funds, some centered on the social aspects of society, some others on music, others on outreaches with bouncy-house-packed block parties, and still numerous others on sending masses of people from one church to another city to create an “insta-church.”

While it’s not productive (or wise) to point blameful fingers as to what went right and what went wrong over the last ten years in planting—I believe it is essential to analyze and learn. Admittedly, I long and love the passion and attempts for any missional engagement to reach the lost.

Once, a woman complained to D. L. Moody:

“Mr. Moody, I don’t agree with your evangelism methods.”

Without hesitation, Moody responded, “I agree with you. May I ask what your methods of evangelism are?”

The woman quipped, “I don’t have any…”

To which Moody famously retorted, “Then I like mine, better.”

With that clarified, I believe the Western church has been planting churches in reverse—backwards. And, we can do better.

Once again, let me reiterate, I love the fact that the Church is planting churches, period. I also believe that to effectively reach unreached cultures, the church will have to utilize a multi-pronged approach to planting.

There is no “cookie-cutter” approach to planting. But, there is one aspect which should be the center-focus of all churches, missions, and plants—making reproducible disciple-makers.

The Church may have changed her tires, but without reproducible disciple-making, depress the hazard button now and prepare for another blow-out!

While an overall focus is beginning to shift, a more concerted effort and awareness are imperative.

When planters focus on core groups and launch teams, instead of Great Commission multiplication, it is certain that people-centered “churches” will form. Most church planting networks emphasize their programs and upon numerical gatherings than people? Not all—but most.

Discipleship becomes an after-thought of what the church does, once people are gathered within it. While the Church may have seen a shift from the attractional model to the missional model—that was only a change in cheap tires, not in run-flats. As you can see—the discipleship after-thought approach is backward.

There are key components to biblical reproducible disciple-making (Matt. 28:18–20). But instead of looking at the main factors (gospel proclamation, baptism, commands, etc.), let’s understand one important principle—disciple-making does not begin with a conversion.

Disciple-making begins with relationship. This is the current church’s major dilemma. As if in a dense fog and driving with the high beams on—the Church is oblivious to effectively navigating the culture highway.

Most church planters are (or should be) trained to build relationships. The problem is that most networks do not focus on disciple-making at the core of those relationships. Discipleship is placed at the end and not the beginning. How so—you may ask?

When the planter targets creating a collective body, known as an ekklesia (the church), the focus is already numbers centered, instead of people-centered. The planter becomes burdened with the mantra “meet more people…gather more people.” The conclusion, the planter will feel like a failure if they’re not gathering masses of people. Likewise, it is not foreign for the planter to wait to engage in any form of discipleship until converts are gathered, as the church.

Reproducible disciple-making begins the church planting process with relationship. I know, if you’re like me, you’re desiring application. 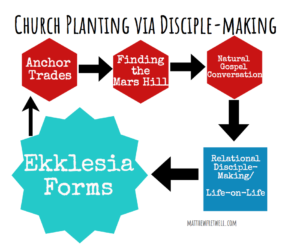 If a planter is parachuting into a city (let’s say, a husband and wife team), the main focus should be on finding an “anchor trade” (a term I coined for New Breed). An anchor trade is an occupation that meets a community need and provides income. Most planters seek to find maximum income potential but will have minimum exposure to the community.

Think of an anchor trade as the proverbial “tent-maker.” Paul’s occupation was making tents (Acts 18), a need that nomadic peoples of the first-century required and utilized. Paul’s tent-making placed him in the center of the community, buying, selling, and making—an anchor trade.

Next, the planter becomes a reproducible disciple-maker by necessitating natural gospel conversations. One of my favorite movie scenes is from The Princess Bride. Inigo Montoya is frustratingly waiting for Wesley to climb the Cliffs of Insanity. As soon as Wesley is to ascend to the top, Inigo will challenge him to a sword duel. The entertainment happens when Wesley reaches the top and sits down to take a rock out of his boot.

Inigo Montoya impatiently prods him, “You don’t by any chance have six fingers on your left hand?”

Wesley humorously responds, “Do you always begin conversations this way?”

A very funny scene, but the church has been so methodically programmed to think in “Christianese,” or to “complete the sale,” that it has forgotten how to have natural gospel conversations—church planters are no different. The first words from planters’ mouths should not be, “Are you saved?” A question the unreached world has no concept.

Discipleship begins with natural gospel conversations—not at a person’s conversion.

Jesus called his twelve followers, disciples. These men did not have illumination, nor were they regenerated. As well, understanding and applying the gospel doesn’t make a person a disciple, either. Clearly, Peter had the gospel all wrong (Gal. 2:11) and no one would reject his disciple “credentials.”

As the church planter continues to work an anchor trade, knowing the Mars Hill, and engaging in natural gospel conversations, true relationships form—which in turn, establish life-on-life disciple-making. From life-on-life formulations, an ekklesia is formed.

Think about the two processes. There is a distinct difference between gathering, establishing, launching, outreach, and then discipleship programs—with anchor trade, Mars Hill, gospel conversations, disciple-making, and ekklesia. One is backward, and the other is in Great Commission order.

Knowing these two processes, the question for you becomes: which will you choose? Let’s just admit—making disciple-makers is difficult and tedious. It’s not glamorous or fun. It is pull over, down to earth, nitty-gritty, go through the trunk, find the car-jack, and greasy lug wrench-get-the-hands-dirty-tire-changing application.

Disciple-making is real life-on-life Christ living. But, if the church is looking for healthy multiplicative reproducibility, starting at relationships is imperative.