I have long been intrigued and captivated by the early church. What I mean by early church is the New Testament era and the first two centuries succeeding. I love the narrative of Acts and its apostolic association with “belonging to the Way” (Acts 9:2). I crave for their sacrifice, and for their disciple-making devotion. While I understand that the early was far from perfect and had vast dysfunction—they also possessed dedication, piety, and desire.

Because of my captivation, I find myself diving deeper into the depths of ecclesiastical disciple-making (See Church Planting by Making Disciple-Makers). My journey has currently positioned me within an early document known as the Didache. If you’re not familiar with the Didache (pronounced, Did-ah-key or Did­-ah-kay), it is not without its controversies, as it seems to have been lost for fifteen hundred years.

As history notes, in 1873 a Greek Orthodox bishop named Philotheos Bryennios was in the library archives of the Holy Sepulchre in Jerusalem sifting through the early manuscripts.[1] Bryennios wasn’t exactly sure what he had discovered, as the Didache was “sandwiched between other early church documents;” namely The Epistle of Barnabas, 1 and 2 Clement, 12 letters of Ignatius, and several others.[2] While Bryennios’ contemporaries had common knowledge that Origin and Athanasius had referenced the Didache, many scholars believed that no extant manuscript existed—until Bryennios.

By the early nineteenth century, the universal church was not monolithic regarding the dating of the Didache. While a small debate ensued regarding the text, some even considered it to be fraudulent. However, with ongoing German and French research, the discovery of the Dead Sea Scrolls at Qumran in 1945, and the critical work of Willy Rordorf, the dating of the Didache was credibly proposed as preceding the Gospel of Matthew.[3]

Nancy Pardee believed that the Didache’s early dating demonstrated an “important witness to the composition and development of the New Testament.”[4] She stated, “Such an early date and stature by themselves would make the Didache an important witness alongside the New Testament of the development of the early Church, but the additional fact that the text is of more utilitarian nature means that it does not merely supplement the biblical texts, but compliments them.”[5] Indeed, the Didache does compliment the synoptic Gospels.

The Didache itself is only sixteen short and concise chapters (a quick 20 minute read), instructing in the ordinances of the church, prophets, apostles, bishops, and deacons within the church, and some brief eschatological views. I found the section on the Eucharist, “breaking the loaf,” to be incredibly illuminating and missional. With the disciple reciting back the words during the Lord’s Supper (I paraphrase):

“As the seed that produce the loaf is scattered over the mountains,

And then gathered in and became one,

So may your church be gathered together into your kingdom,

The Didache is truly an amazing document, but it was never intended to be equated with Scripture, as it was a practical learning tool (orally taught) for new converts. Perhaps this is the reason for its disappearance? Yet, as someone that thrives to reach the world’s lostness, the Didache’s practical guidance regarding reproducible disciple-making is what I find the most intriguing.

If the dating of scholars is true, as one reads the Didache, the Gospels are immediately apparent. As well, the writer of the Didache notably assumes the reader understands the Sabbath days, rejecting the Roman days of the week with “second” and “fifth days of the Sabbath” being set aside as fast days.[7] Most noteworthy is how the two ways of life are taught to a new convert; once learned, the “disciple-maker” baptizes the new convert, after a day or two of fasting. The reason I find this so noteworthy is its implication for rapid multiplication.

The Way of Life

The first several sections of the Didache are the two main aspects of the “teaching.” In perspective, we shouldn’t be surprised with the Way of Life and the Way of Death as central tenets, as a latter title for the Didache was “The Lord’s Teaching to the Nations through the Twelve Apostles.”[8] The Didache is missional, devotional, and multiplicative. Yet, within the two ways they provide a glimpse into an early devoted and dedicated community—devoted to holiness and dedicated to Christ and one another.

The Didache begins with the introduction consisting of the two ways (1:1) but immediately proceeds with the first four succinct chapters describing the Way of Life. As a believer, I instantly see the value of guiding of a new convert through these first thirty-seven “verses.” The Way of Life begins with the greatest commandment, “You shall love God who created you; second, your neighbor as yourself; all those things which you do not want done to you, you should not do to others” (1:2).[9]

The abstention from “carnal desires” and how to practically treat others is resounding (1:4). Giving is not a motto for the Way of Life but emphasizes God’s generosity to the adherent (1:5). It is easy to see the Ten Commandments interwoven throughout the Way of Life (2:2–7), as well as humility, patience, justice, hard work, and respect for the image of God. The new convert is reminded not to neglect the “Lord’s commands, but to hold fast to what has been handed down to you” (4:13); the very nature of disciple-making!

The Way of Death

One might assume that the Didache is merely a set of rules and regulations, a means of legalism, but to the contrary:

“If you are able to bear the whole of the Lord’s yoke,

you will be complete.

However, if you are not able to bear that yoke,

In reflection, the Way of Death denotes the “old self” and the ways of the world, but as a student of the Bible, the Didache reads as a mixture between Jesus’ words and Pauls’ epistles. The Way of Death ends in chapter six and is much shorter than its counterpart, the Way of Life. The Way of Death is utilized as a practical guide of admonition, encouragement, and sanctity.

Spending the last several months researching the Didache has been more than rewarding; it’s been enlightening and informative to view an early community of steadfast believers. Without Scriptures, Paul’s epistles,[10] the Gospels, and Revelation, it is eye-opening that such a document could have existed and point to biblical values (i.e. Great Commission teaching). The Didache demonstrates that the early church was not merely concerned with “Jesus loves me this I know” and that’s enough, but with multiplication, perseverance, righteousness, and humility.

The remaining chapters of the Didache are no slouch, either. Understanding its views of baptism, the Holy Spirit, the Eucharist, church administrative structures, and end times may not be prescriptive or inspired, but they are revealing as to how the early ekklesia communities lived out the rhythms of life. Any time the modern church can utilize documents like the Didache, I believe it to be edifying. Again, while the Way of Life and Way of Death are not inerrant and inspired, they are definitely biblical—there’s no doubting their veritas.

[5] Pardee, Nancy. Genre and Development of the Didache, 1.

[10] Even though there is ample evidence that Paul’s letters were circulated among the early churches, early dating of the Didache would predate the over a third of the New Testament, including the Gospels. 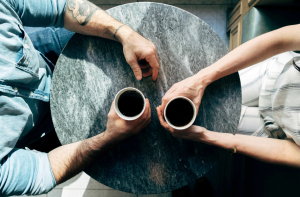